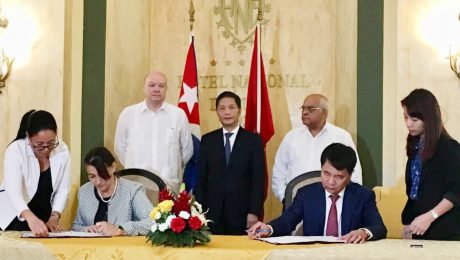 On March 29, the Cuban Government issued a license to invest in the Mariel Development Zone for ViMariel SA – the first fully foreign-invested enterprise in Cuba invested by Viglacera. The two governments expected that this will strongly improve to the economic development of the Caribbean island.

The award ceremony took place in the presence of the Minister of Industry and Trade of Vietnam, Mr. Tran Tuan Anh and the Minister of Cuban Ministry of Foreign Trade and Investment, Mr. Rodrigo Malmierca Diaz at the Business Forum in La Habana, in the context of the State visit of the General Secretary of the Central Committee of the Communist Party of Vietnam – Mr. Nguyen Phu Trong to Cuba.

Speaking after the signing ceremony, Mrs. Igarza said it was part of Cuba’s effort to call for foreign capital to serve the development of infrastructure needed for potential investors in the Caribbean island .

According to the agreement of investment in Viglacera’s Industrial Park development in Mariel, Vietnamese enterprises will invest about $300 million to build a 160 ha industrial park in the next 5 years (from 2019). It will have adequate infrastructure for roads, telecommunication, electricity and water supply networks for industrial facilities and Vietnamese enterprises will have the right to exploit this park for 50 years. It is expected that ViMariel S.A’s industrial park will attract investment by logistics, biotechnology, pharmaceutical, electronics and manufacturing businesses.

In the field of investment in construction materials in Cuba, Viglacera Corporation JSC has worked with the Santa Cruz tiles factory and San José sanitary wares factory.

Santa Cruz tile factory, the only factory in Cuba producing ceramic tiles for the entire country’s demand, is invested in technological lines of Siti (Italy), put into operation in June 2008 with the capacity designed for 3.141 million square meters per year. San José sanitary wares factory produces sanitary wares and tiles. In particular, the sanitary ware lines were invested with the technological of an Italian brand, Sacmi, which was put into operation in 2007 with the designed capacity of 154,000 products per year. The signing of a joint venture contract and the signing of the joint venture charter between Viglacera and the two factories will take place during the Fecons International Exhibition, from 3 to 6 April, 2018 in La Habana, Cuba.

Viglacera booth at the Fecons International Exhibition, from 3 to 6 April, 2018 in La Habana, Cuba. 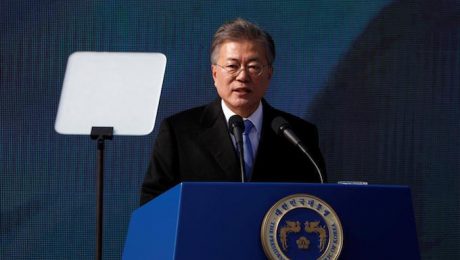 South Korean President Moon Jae-in and his wife will pay a three-day official visit to Vietnam starting next Thursday, according to Vietnam’s foreign ministry.

During the visit, Moon will attend a summit with his Vietnamese counterpart Tran Dai Quang, and meet other government leaders, including General Secretary of the Communist Party Nguyen Phu Trong.

This will be Moon’s first official visit to Vietnam since he took office last May, and his second visit to Vietnam after attending the Asia-Pacific Economic Cooperation (APEC) Summit in Da Nang last November.

Moon’s visit to Vietnam will be his second official visit to an ASEAN country as part of his “New Southern Policy,” which aims to elevate South Korea’s relations with ASEAN to the same level as its relations with the U.S., Japan, China and the E.U.

During the Vietnam visit, Moon is also expected to seek ASEAN support and cooperation ahead of the historic inter-Korean summit with North Korean leader Kim Jong-un next month. Stressing the importance of ASEAN in de-escalating tension on the Korean Peninsula, Moon has promised to visit all 10 of its member states before the end of his term in 2022. 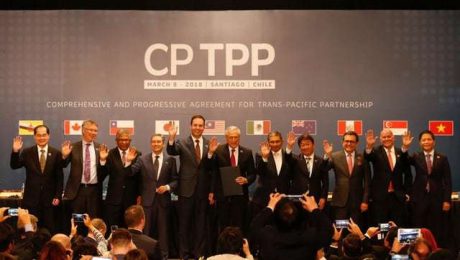 South Korea should speed up its move to join a multilateral Pacific trade pact signed by 11 regional nations to cushion the blow from a potential trade war, analysts said Sunday.

Against Trump’s America First strategy, a growing number of nations are seeking to enter larger multilateral trade pacts that will ensure free trade with no tariffs and barriers.

The latest development is the signing of the Comprehensive and Progressive Agreement for Trans-Pacific Partnership (CPTPP) in Santiago, Chile, March 9.

The revived version of the TPP represents 500 million people and accounts for 13.5 percent and 15 percent of global gross domestic product and trade, respectively.

“Once the CPTPP is implemented and begins the process for new members to join, accession should be a priority for South Korea and the CPTPP members,” Troy Stangarone, senior director at the Korea Economic Institute (KEI) based in Washington, told The Korea Times.

He pointed out that while the China-led Regional Comprehensive Economic Partnership (RCEP) will provide South Korea with increased market access in Southeast Asia, the CPTPP will be the more important agreement in the long-run.

“As a major trading nation Korea has prioritized market access through the reduction of tariffs historically, but as services and technology become increasingly important, ensuring that there are enforceable rules in place should be a priority for any Korean government,” he said.

The revamped TPP, which is scheduled to kick off in the first half of 2019, is open to new members. The 11 current members are Australia, Brunei, Canada, Chile, Japan, Malaysia, Mexico, New Zealand, Peru, Singapore and Vietnam.

Korea has remained lukewarm about the Pacific trade pact since the U.S. withdrew from it immediately after Trump took office early in 2017.

On March 13, Finance Minister Kim Dong-yeon said that the country will decide whether to join the CPTPP in the first half of the year.

The analysts said that although Korea has signed FTAs with many countries, joining multilateral pacts would be a better option because it will make it easier for the nation to form a united front against America’s protectionism and China’s rise in global trade.

“I am not sure which ones ― the CPTPP or RCEP ― Korea should join, but the goal should be free trade, knocking down both tariff and non-tariff barriers.”

The RCEP is a China-led mega-regional economic agreement being negotiated between the 10 ASEAN (the Association of Southeast Asian Nations) governments and their six FTA partners ― Australia, China, India, Japan, New Zealand and South Korea.

“Trade agreements with other countries are becoming more important given the unpredictable behavior of the U.S. Even if those agreements are not perfect, they are necessary,” he said.

If the U.S. decides to join the CPTPP, other countries, including Thailand, Taiwan and Britain are expected to follow the suit.

Trump recently hinted that the U.S. may rejoin the revived TPP “if better terms could be negotiated.” Since the withdrawal of the U.S., Japan has led its resurrection.

Experts said that Korea should pursue a two-track strategy by maintaining sound relations with the U.S. and China, given its dependence on the two biggest markets.

“Korea in the long term will be more aligned with China than with the U.S. It’s a matter of proximity,” said Mauro Guillen, director of the Lauder Institute at the University of Pennsylvania’s Wharton School.

“At the same time, the U.S. will continue to be an important trading partner. So Korean politicians and diplomats will need to be very careful and maintain a balance.”